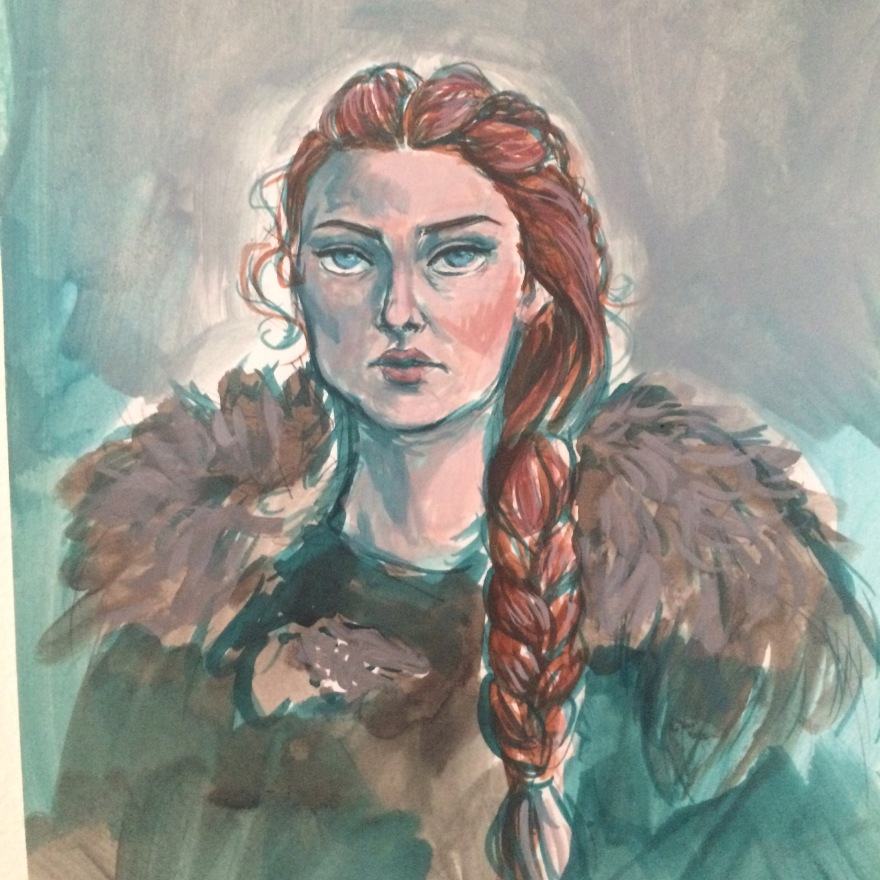 Finished a commission last night and decided to reward myself with a speed painting of my favorite Game of Thrones character before going to bed.

I finished the Octopus painting! It is 11″x17″ acrylic ink on bristol and I finished it while at my table at Smallville Comicon!

Currently behind my table at Smallville Comicon!

Working on my octopus in my down time: 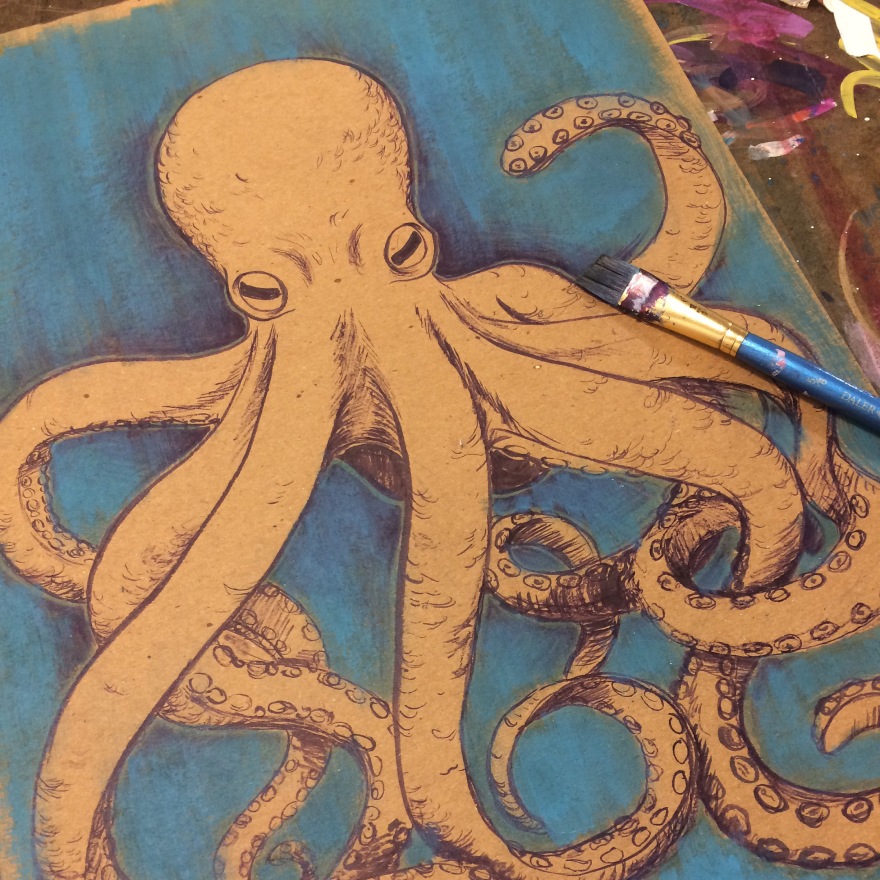 Work in progress shots of an octopus I’m working on!

This weekend I will be at Smallville Comicon! Not only will I be in the artist alley peddling my wares, but I will be speaking in a couple of panels as well.

In the meantime, I have started writing chapter 4 of Panty Vigilante! More to follow on that.

I was interviewed recently by David Frese, of the Kansas City Star, about sexism in comics. You can read about it here!

Posted on June 4, 2016June 4, 2016 Posted in AppearancesTagged cancellationLeave a comment

I am going to have to cancel my appearance at River Des Press today. I’ve been running myself ragged and have some things to take care of before Smallville Comic Con next weekend. Sorry, guys!

Maybe it’s because I grew up doing it and take it for granted, but I don’t get people who mysticize and glamorize art. I’ve grown up hearing about “talent” and the “artist’s eye” (whatever that even means) since I could pick up a crayon; and you know what? I hate it.

I hate it because this pedestal we’re put on dismisses what art actually is: work. People don’t want to believe that hard work and practice are really the only things that get you anywhere. There’s always some sort of trick or secret. Like some of us are in on something that others are missing. It’s why people can be duped into B.S. fad diets when they want to lose weight. It sounds so much sexier and more enticing than “burning more calories than you consume”. (Which is the bulk of what weight loss really is. I would know. I’ve lost 65 pounds thus far and it wasn’t through gimmicks and trickery).

People come up to me and I hear the same thing ad nauseum: “I wish I could draw”. I smile and say the same thing over and over: “lots and lots of practice”. They don’t believe me. They never do.

Let me tell you a little secret: if you can learn how to write and make letter forms, you can learn how to draw from life. It is full-on the same concept, just a little more advanced. You are taking what you see and putting it on paper. Sure, it starts out looking like something a kindergartner did (because you were probably in kindergarten when you learned how to write), but eventually your lines become cleaner and your handwriting more legible. Why? Practice.

Anyone can learn how to draw. Anyone. You can only draw stick figures? Great! That is an awesome start! Wanna get better? Try asking me how! I would be more than happy to point you to books, classes, and tutorials that have helped me out personally!

But don’t tell me I’m just naturally talented or somehow more artistically inclined than someone else. That implies that art is easy. It’s not. Sure anyone can do it, but I’d be remiss to say that art is easy. Art can be hard. Really, really hard.

Why does all of this bug me so much? The moment people start saying art is anything other than work is the moment people start dismissing its value. Artists dedicate their lives and finances towards doing what they do to make a living. Sure, we do it because we love it, but we don’t see it as magical. We see it as work. And like anyone who works, we’re trying to pay rent and buy groceries. That painting you bought from us? We use it to buy things. Like toilet paper. Because we’re not magical beings. We poop out of our butts like everyone else.

If you like my stuff and appreciate what I do, great! Awesome! I’ll be the first to admit that I’m a sucker for compliments. But, the moment I hear about “talent”, or having some “special sight”, or implications that I was farted on by some magical art fairy because God liked me best that day, and walk away without buying anything, please bear in mind that you’re probably leaving me wanting to break into the nearest petting zoo, finding the thing that is most adorable, and punching. it. So you can have that on your conscience. Way to go, You.

Tl;dr: if you don’t appreciate an artist’s work, then you advocate for animal cruelty. You monster.

If you are in the St. Louis area this Saturday, I highly recommend stopping by the River Des Press Expo. You should most certainly attend because a) supporting indie comics and zines is hella rad, b) Yours Truly will be there, and c) it’s free, so really you have no excuse.

There will also be food and live bands.

Check it out, yo!

I added the entire archive of my old, now defunct webcomic, Starcrossed! The website was no longer online and I wanted to make it accessible to anyone who might like to see it.

I worked on Starcrossed from 2008 to 2013, with a long hiatus taking up a large part of that time period. It was the first story-based comic I had ever worked on and I experimented with it. A lot. The artwork jumps around a bunch as I was trying to gain my footing as an artist. The writing was decent, but I had no idea where I was going to go with it after a while. Eventually I just decided to call it quits so I could work on other projects. It still holds a very fond place in my heart and I learned a lot from it.

You can check it out on the ‘Comics’ page or here for your convenience.