I’ve been meaning to make tutorials for my artwork for as long as I’ve been posting my stuff online. So for approximately 15 years, I’ve been meaning to get around to it. It’s not because of laziness or just not knowing what to make for any given tutorial. I have ideas. I always have ideas. I just get so into what I’m doing, I forget until I’m about midway through any given artwork that I had meant to use that piece to help enlighten others.
Thankfully smart phones and wi-fi are a thing now, making posting progress shots online super convenient. If you happen to be on Instagram, my username is erica_supreme and you can catch these pretty much real time. Otherwise, I’ll post my progress shots here and try and talk my way through them the best I can.

So this is the cover art for chapter 2 of Panty Vigilante. For those unaware, it is my webcomic which I collect and turn into printed comics as soon as a chapter is done. You can check out the comic here.

Anyway, I do all of my comic stuff at 11″x17″. I recommend anyone in comics work in this size if you aren’t already. It makes things a lot easier on you when you shrink it down for print later on.

All of my comic work is also done on bristol. It’s a little bit heavier and more durable.

So here I am about midway through the pencils. I work a lot with gestures, which you can’t really see here. I’ll try to post some in the future. I just wanted both figures to flow and compliment each other. 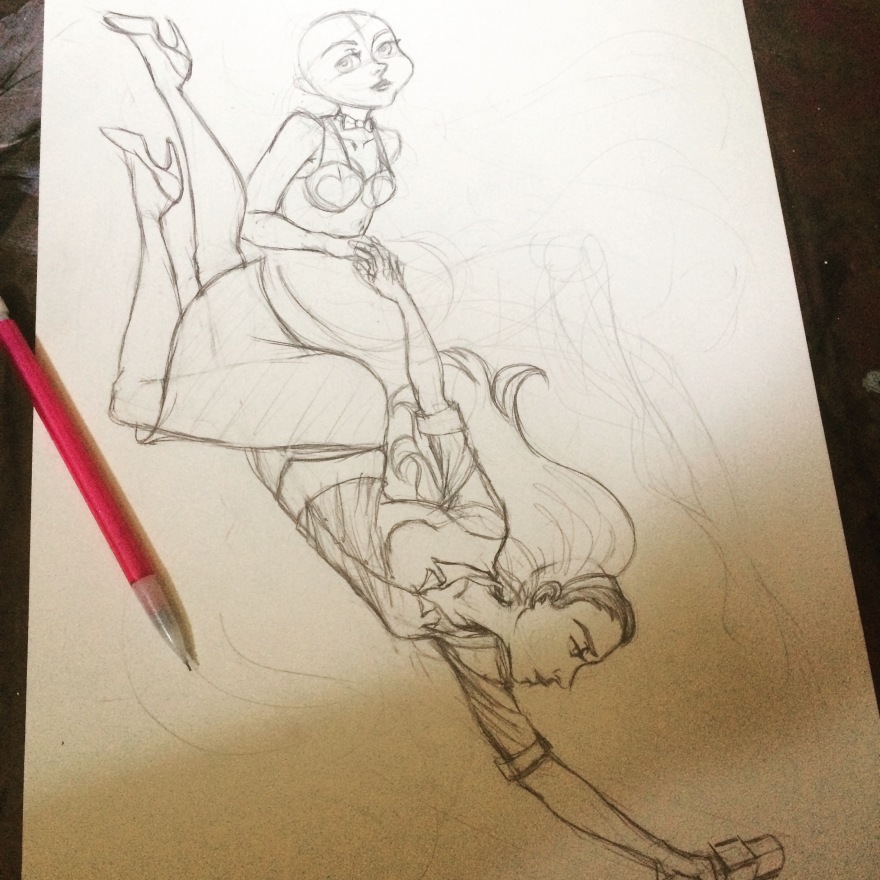 It’s really easy to fall into the trap of super elongated bodies. I had to erase a lot. For Addey (the upside down character), I drew her right side up, then flipped it for Kate. I also kept drawing Kate’s legs really long at first. 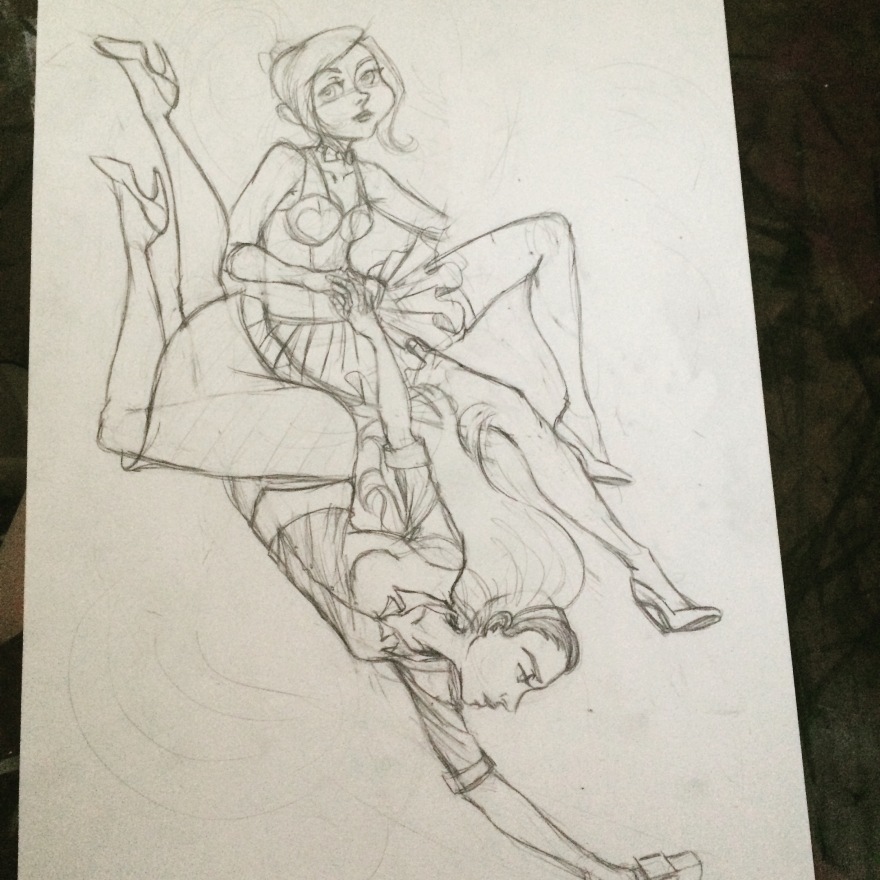 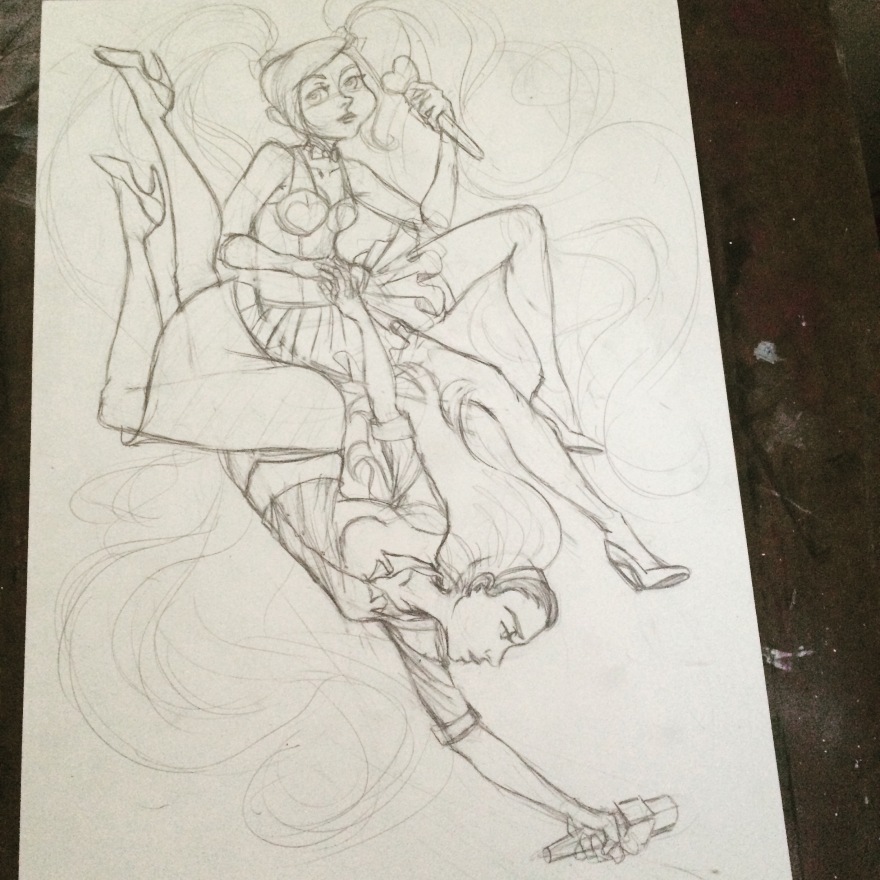 Now onto inking. I did this in two steps: with a fountain pen to get the initial lines down, along with fine details, and then I went over with a brush for line variation and “flow”. The hair was mostly inked with a brush.

I use acrylic inks for my inking and painting. The brand I use is Liquitex, but there are a lot of good brands out there. 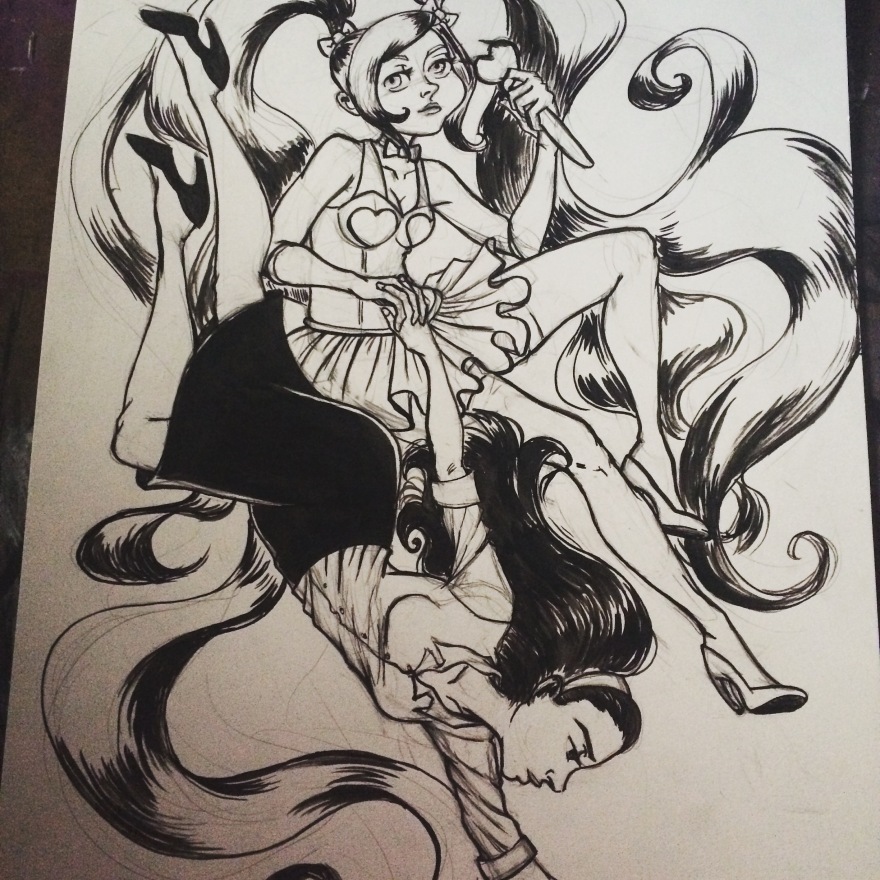 When I go to color, I always start with a base color. Usually if I decide on one in the beginning, it serves as a good point of reference for all of my other colors. For this painting, I started with a blue wash. At this point, I’m using mostly water. I’ll build on it later.

Also I had to take a lot of breaks to let this dry so I don’t warp the paper too much. 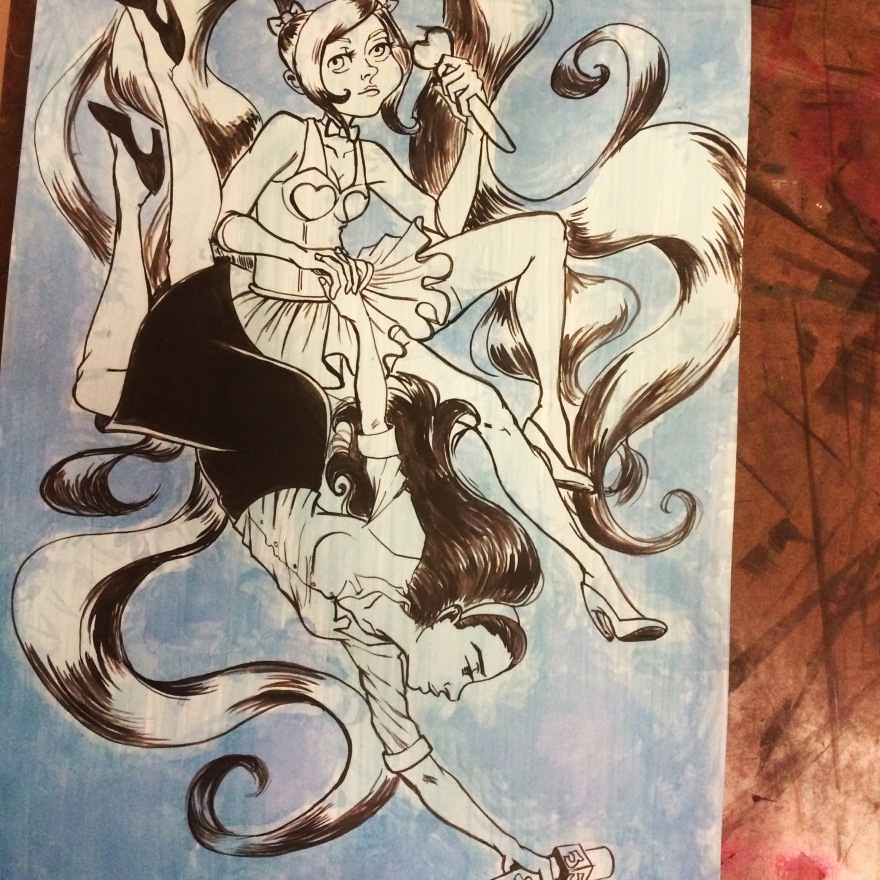 Here, I’ve started layering on color. I used a lot of blues and a magenta to bring in pink and purple tones. It breaks up the monotony and makes the blues look nicer.

I use a lot of vertical strokes, finished with paint splatters for texture.

Also once the background was mostly done, I used masking tape to keep the paper from curling.

I usually use a masking liquid on my paintings, but for whatever reason skipped that step here. I ended up having to work around that later on. 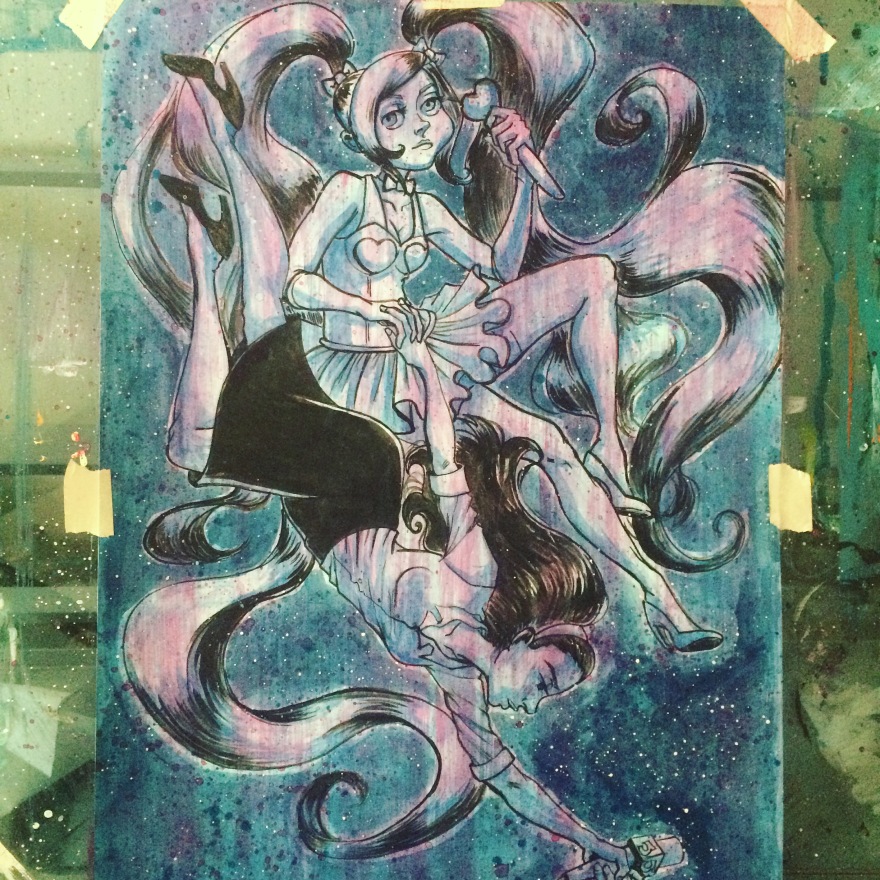 The problem I ran into from not masking out the characters was that the ink is still pretty transparent and the wash was too dark. I ended up mixing in a little bit of white gouache to help with opacity. 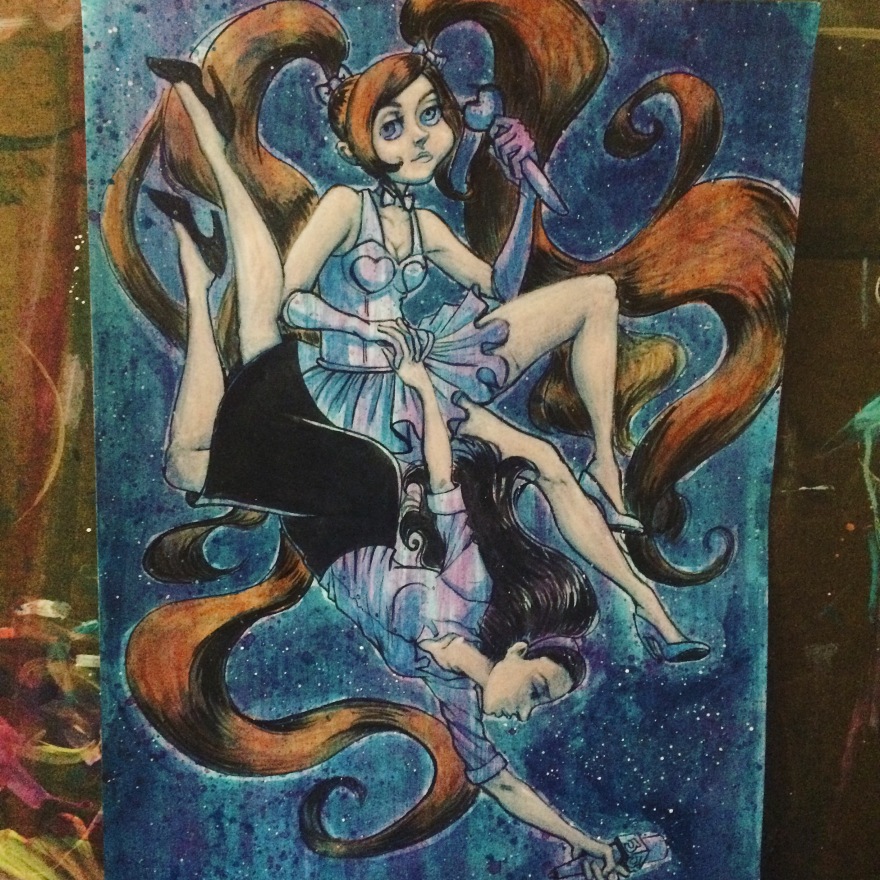 Hair is done and I’m moving onto clothes! 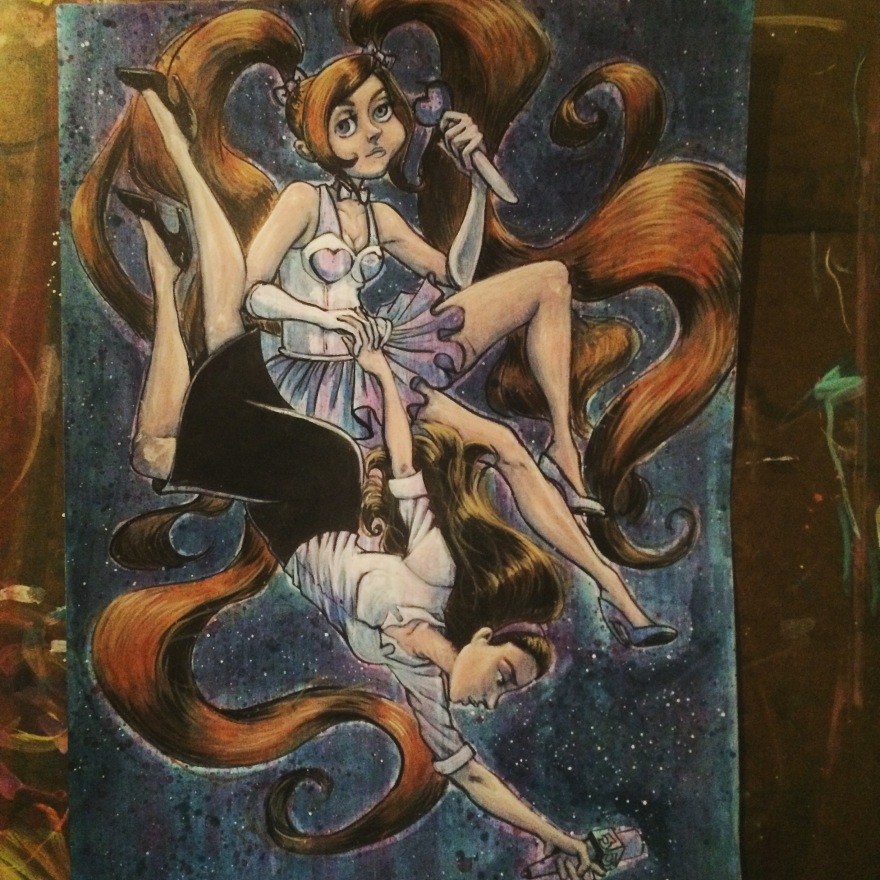 Decided they were looking a little pale. I used some really watered down magenta to add a touch of blush to their skin. Also got more of their clothes done. 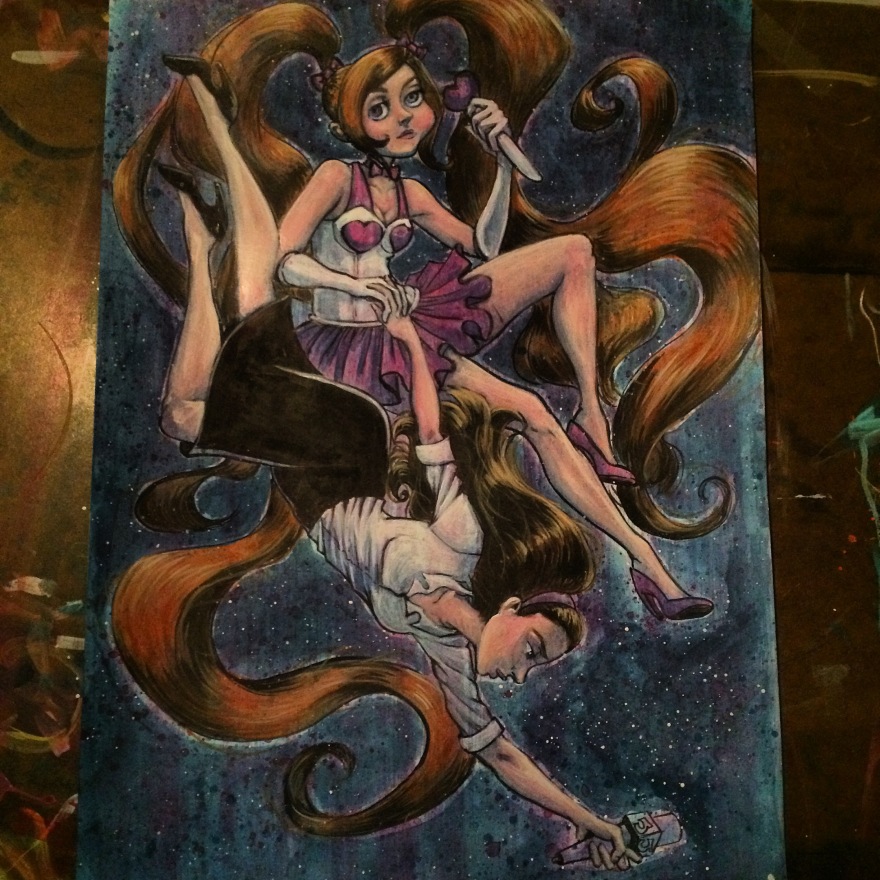 Starting to add in highlights. 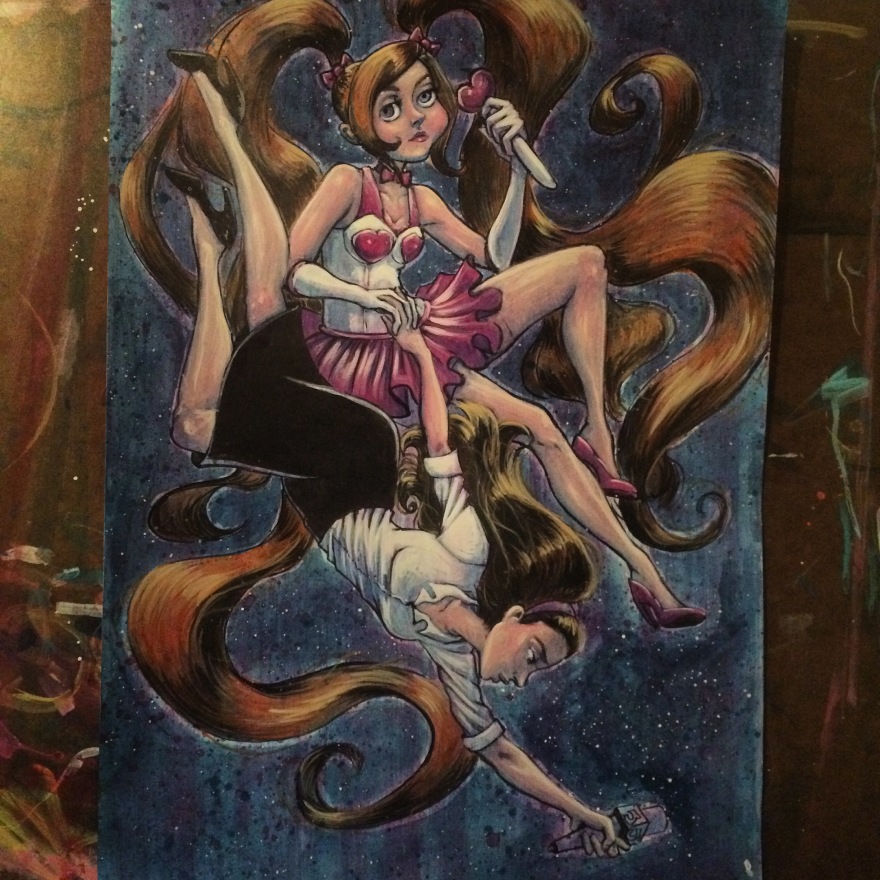 Bumped up the highlights more! At this point on Instagram I considered it finished, but I ended up painting over the highlights on her skirt to tone it down (I overdid it) and added a white outline. 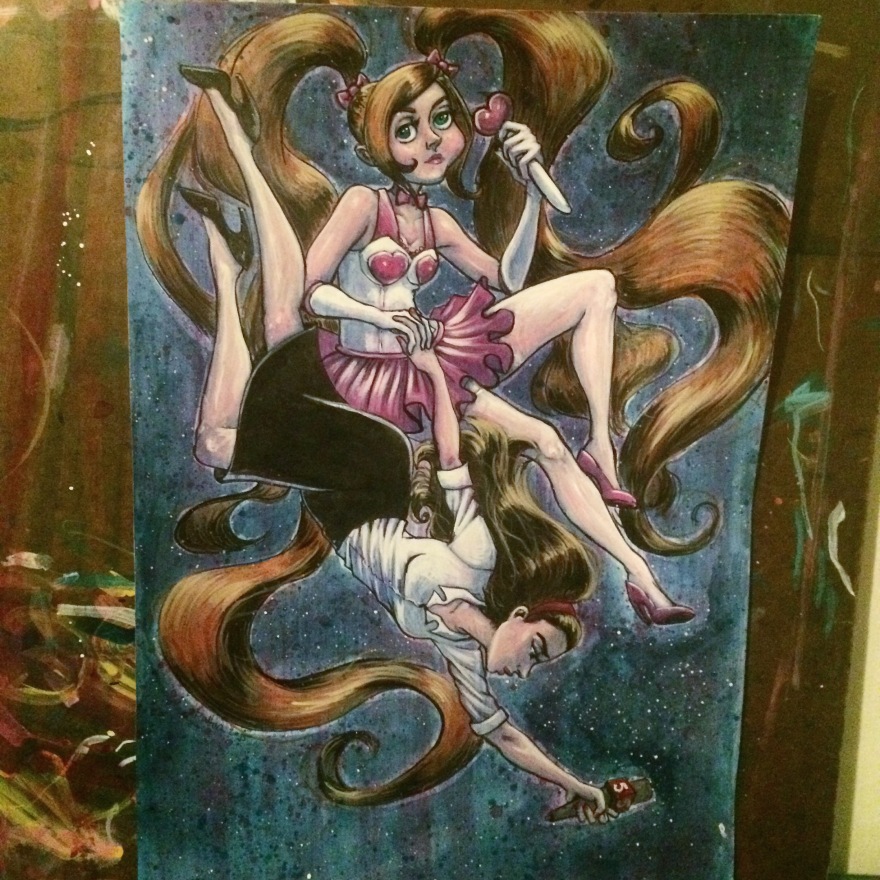 This is the final product. It scanned in really blue, so it took a long time to correct in Photoshop. It probably wouldn’t have been as much of an issue if I had just masked the characters in the beginning. Ah well, live and learn.

I also brightened it using color dodge in choice places. Mostly the hair. 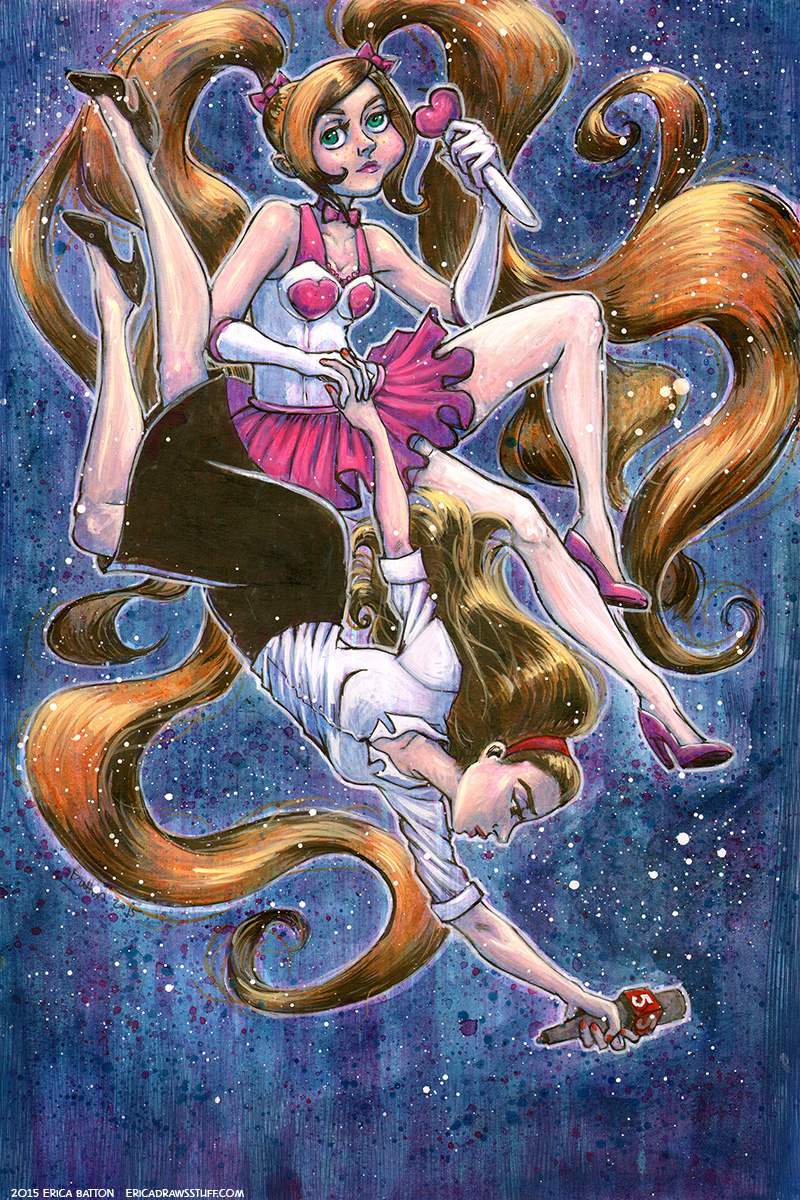